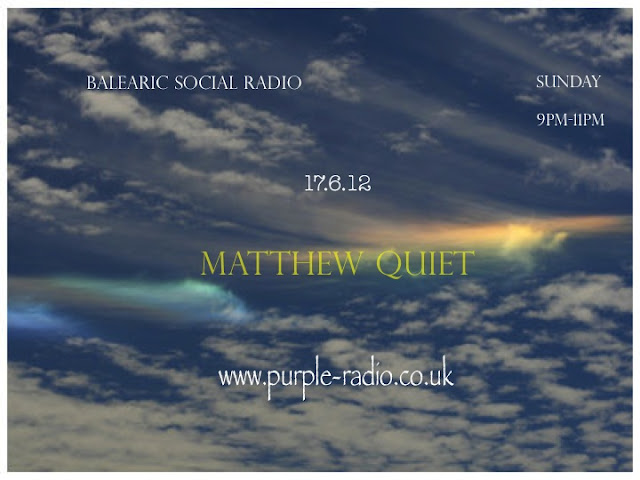 Tonight's show see's another trans atlantic guest joining me for the guest mix.

Matthew joins us from sunny San Francisco with a mix full of Balearic treats.

Here is what Matthew had to say on his mix.

The mix was inspired by a New Year’s Day gig I played this year. It was at a good friend’s loft with Omar S and the Made Like a Tree guys in Seattle. I wound up playing like 6am-1pm. Anyways, there was an hour or so right before sunrise that I felt like the party could use a breather. I played a lot of these same tracks. Relaxing and longing for an hour or so seemed like an oasis. Once the sun was shining again we started back up and I felt like once a beat returned it was like hearing one for the very first time. A fantastic morning.

I like the idea of mixes like this one not having a track listing. It makes it more of an adventure to listen along and adds a bit of mystery to the experience. I’ve no secrets though. If anyone would like to know what any tracks are they can feel free to email me at matthewquiet@gmail.com.

As ever i will be playing 9pm-10pm and Matthew will close the last hour between 10pm-11pm.

The last few weeks have been busy and the guest's have all been confirmed up to the end of the year with Sean Johnston ALFOS christmas special will round the year off.

In between we have mixes coming up from all over the world and at home.

Andy.
Posted by Balearic Social at 11:42