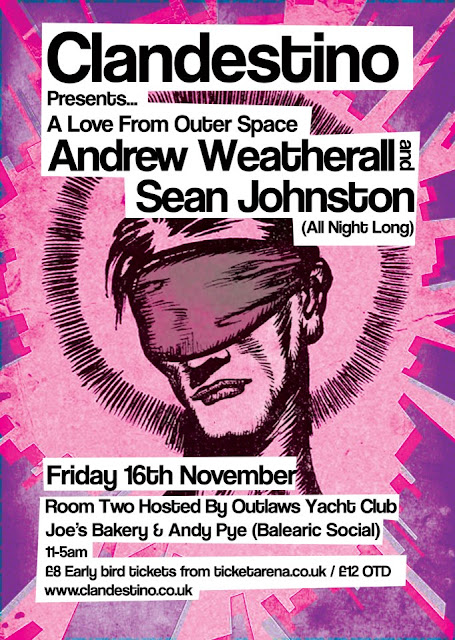 In just over eighteen months, A Love From Outer Space has risen out of a smoky North London basement and onto the stages of the world’s most discerning festivals and underground dance floors. What can be said about its creator that hasn’t been said already? Andrew Weatherall has achieved cult-like status over a 25 year career that has seen him as pioneer of the early acid house movement at London’s legendary Shoom club; producer of Primal Scream’s seminal ‘Screamadelica’ album; creator of the iconic Sabresonic club, held the infamous Monday night ‘Wrong Meeting’ parties with Ivan Smagghe and more recently he’s presented lauded guest spots on BBC 6Music, where he’s seen by many as the natural successor to John Peel.

But it’s his latest project with which Clandestino has chosen to open its doors. ALFOS as its become affectionately known is described by Andrew as an “oasis of slowness in a world of increasing velocity”, and along with long-time collaborator and Hardway Bros. Sean Johnston they purvey a chugging hypnotic house formula that draws influences from dub, disco & acid while sticking to their mantra of “never knowingly exceed 122bpm”. For our opening party we hand over the decks to them… all night long.