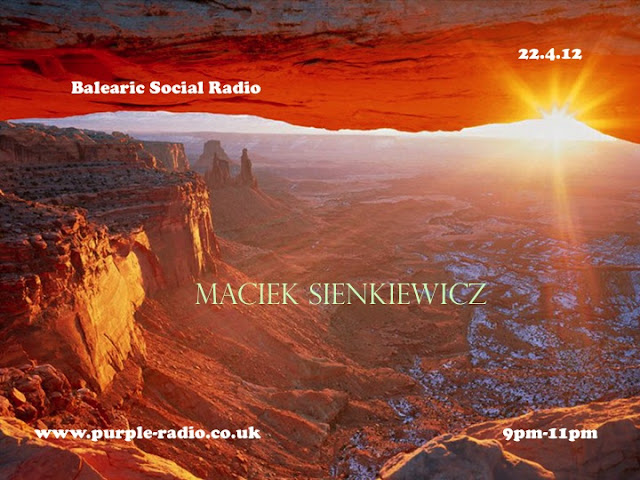 
In the studio tonight see's me joined by Maciek Sienkiewicz from Poland with this weeks guest mix.

Maciek was born in 1970 in Warsaw he is a DJ, musician and journalist, one of the pioneers of Polish electronic/club music scene.

Started in early 90s playing anything from hip hop and acid to New Beat and rock at early underground parties in Warsaw.

Since then, DJed from Eastern and Western Europe to US and Mexico, collaborated with numerous visual artists, scored short films and art projects, played improvised noise with musicians from around the globe - always choosing the very own path rather then following fashion.

For the past few years is exploring the possible connections between modern electronics and obscure, or simply forgotten, rock and pop music. Currently lives in a lovely countryside in North-Western Poland.

This weeks show as ever will bring together music joining the dots of balearic, cosmic and downright leftfield.

9-10pm will see myself supplying the soundtrack and Maciek will take over at 10pm until 11pm.

Tune in and listen at www.purple-radio.co.uk.

Shoutbox available so say hello and enjoy the show.

Listen via the Purple Radio player or through your chosen media player.