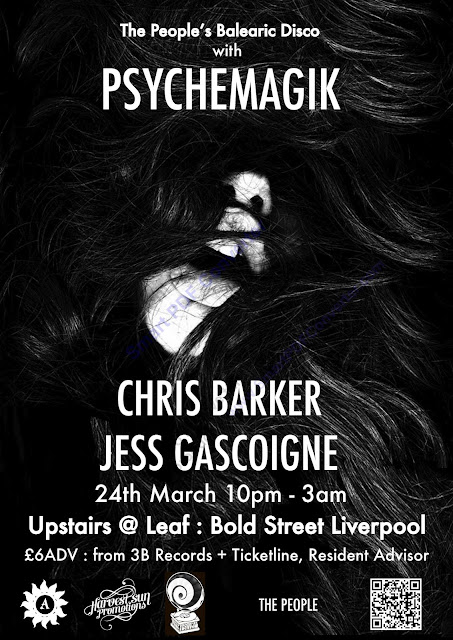 THE PEOPLE'S Balearic Disco with...

Not much is known about the THE PEOPLE other than it was born out of a chance meeting on the lost Mediterranean Island of Altiplano.

They have one mission, to spread the island's message of Love, Peace & Harmony, using the only tools they have - MUSIC.

So with that we are extremely proud to present DJ's/producer's/remixers of the moment PSYCHEMAGIK to our debut shin-dig. They will be making a rare appearance up North for this special night.

Their intent and purpose is clear...

"Music is the celestial sound, and it is sound that controls the whole universe, not atomic vibrations"

Will The Cosmic Forest be the same without them?

Joining them, and quite a coup in prising them from the isle are Altiplano residents Chris Barker, Andy Ash and Jess Gascoigne.

Come and join us...WE ARE YOUR FRIENDS.
Once upon a time, deep in The Cosmic Forest, was a fabled hideaway. It whispered of masked dreams, ushered in hidden truths. Fantasy and adventure were the alchemy that fuelled the fire. With moods so vivid you could almost taste them, imagination flew into the night with wild abandon. Spirits soared. Fairies danced with transcendent delight under the light of an eternally full moon. Eventually, as is its’ nature, modernity found its’ own course and wove a path into the world as we know it.

Living and breathing the air that time forgot are two creatures of this ageless beauty. Tucked away in their remote Cosmic Forest studio, Psychemagik embody the lust of wonderment and the endless bliss that is musical treasure. Together, they encapsulate what always was and is always meant to be. Welding away by candle light, their passion for composition and seamless production is enabling a whole universe of lush, delirious, existential explosions of sound to proliferate. Come closer…. Take a peek… Be seduced by twilight… Join them in their cosmos and see the world through their eyes. Allow yourself to be drawn into their enchanted escape, the vista that will forever be lost in space.

Limited edition, hand numbered, coloured vinyl arrived on the wings of doves in June 2011. It was sealed at the witching hour and sent forth on all four winds. The first official 12" from this LP 'Valley Of Paradise/Star Lazer' had been long awaited. Rising from the mist in the very near future is a much anticipated album and remixes that fell to the Earth in a blaze of shooting stars. Rest assured… It is all as mysterious as the duo themselves.

Love is summer. Summer spanks of love. Psychemagik’s Summer Of Love edit of Fleetwood Mac's ‘Everywhere’ was embraced by Dj's all around the world- from Rob Da Bank on BBC Radio 1, Chris Coco on Melodica Radio and, ever so aptly, this golden nugget had the honour of being the closer track at the grand finale, the closing party at Space – Ibiza, in the year of its’ release.
The uber chic History Clock label has also embraced their unique talents and symbiotic musical ear. Lauren Laverne and Nemone, on BBC Radio 6, have been regularly dropping their edits and remixes. Their feature on legendary Annie Nightingale’s program on Radio 1 was a recent highlight.

Click on the link to revel in the joy that was:
Annie Nightingale Psychemagik Mix 25.03.11 by Psychemagik/

Wanting more? Escape into their 'Discotheque Wreckers' imprint, a home for their lesser known edits and pockets of exploration. Share in the joy that is golden discovery. You may know that the hunt for rare records and making beats are the forces that drive them. Psychemagik’s reputation as “the go to guys” for ultra-rare records is undisputed. If lost, let them find you whatever your heart desires. Many of us crave the romance that is vinyl in this digitally orientated age. Its’ touch, the mesmerising qualities of spin…. Breath-taking. Many seek them out to track down things thought impossible. Counting, amongst many others, are the satisfied and influential names of Soulwax, Lovefingers, Q-Tip, Fake Blood, Tom Middleton & Faze Action.

So, you’ve experienced their kaleidoscopic, mind-altering compilation for Light Sounds - Dark Records- 'After The Void'. Todd Terje, 2 Many Dj's, Lexx, Faze Action and Jaz (just to name a few) all found the love too irresistible to deny.

Everyone longs for a little touch of hot n’ breezy, tropical disco….
Psychemagik’s edit for the esteemed 'House of Disco Records' landed just in time for a sun-drenched summer. It was a Margarita in a 12". The weather may be cooler but things are heating up in the The Cosmic Kitchen. Keep a keen eye on that thermostat over the next few months. Temperatures are bound to rise rapidly when the exciting, new edits from their 'Healin Feelin' series arrive on the Kitchen table. Four freshly baked, limited edition 12''s will precede Psychemagik’s delectable edits album. (Not to be confused with their impending studio album) To be released on CD later this year, it is brimming with a diverse array of 12 eclectic tracks that are destined to enthral. It’s time to ditch the Damarts and bask in the warmth of what’s on the horizon.

Let Psychemagik take you by each hand and lead you, blindfolded, into their fantasy world. Open your eyes… Move slowly…. Breathe deeply… What’s before you is a mystical wonderland, sprinkled with magic dust and misted by the tears of the heavens. They will free your mind as the scarf of the everyday falls. Welcome to the place where everything is possible, the place where dreams spring to life.
Posted by Balearic Social at 21:23

Email ThisBlogThis!Share to TwitterShare to FacebookShare to Pinterest
Labels: Psychemagik